My favourite walk begins with a stroll westwards along Church Lane 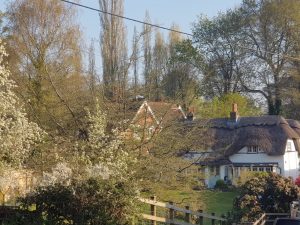 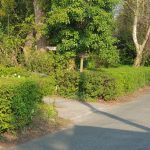 Then take No.4 on the other side of Braishfield Road between two roadside properties.

Once through the garden of Cherry Hill (don’t worry, the owners are kind to walkers) the way lies along the field boundary. 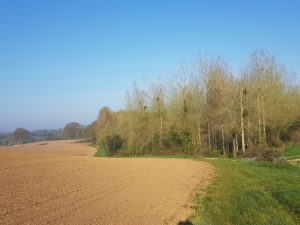 There are good views in all directions over undulating fields.

The slope downhill ends by skirting a renewed plantation then, noting the signpost, you go through a short thicket, over the stile and round the pasture to the west of Paynes Hay Farm. Turn right onto the road you pass the farm and its yard; after about half a mile turn left onto No.8. 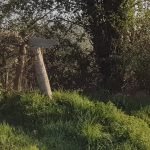 If time is short the walker can quickly get back up to the Braishfield Road by No.9, known as ‘the cut’. But it is the longer route that takes you up to the headland and into park country. 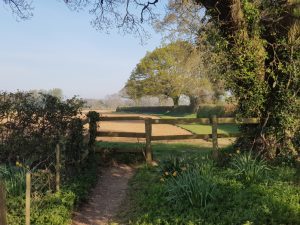 The second field was used in the past for daffodil production, hence the clumps in the hedgerow which you follow as it curves round this long tract. 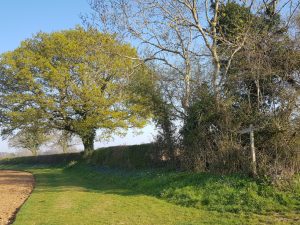 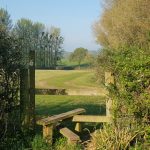 Across the stile and keeping close to the hedge you will find a right turn before reaching the gate onto the road. 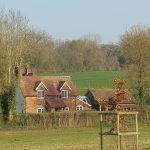 The way goes round this second pasture past Hall Place Cottage until you reach the stile that gives access to Eldon Lane opposite Greenacres.

Perhaps it should be noted that there are often horses in these fields. The lane goes past Hall Place – a prime site with a long history – and at the end of its paddock there is a shady right turn onto the bridleway (11). 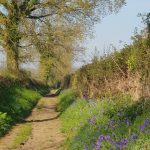 We only have one of these; it is a rewarding route. After a bumpy stretch the way becomes firm underfoot. With the shelter of the trees and good views southward to Southampton Water and westward across the Test Valley this is a length to be taken leisurely. 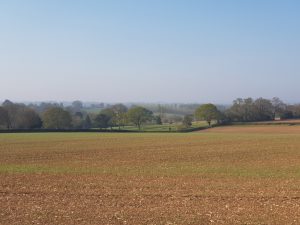 The way proceeds past Windmill Cottage and dips between the Manor gardens and its vineyard (now removed) on a stony descent to the road. 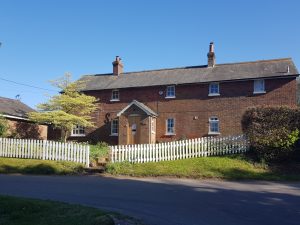 Then go up Farley Lane by Manor Cottage for about a half mile before turning right into Fernhill Lane(13). 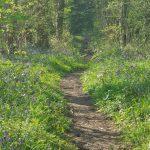 This is ancient Braishfield. The south western slope on the right was home to mesolithic hunter gatherers and behind the Fernhill Farm site on your left there is the site of a Roman Villa. There are glimpses of the village before the path turns round and down through the trees to join Church Lane at Spinney Corner. This path is low lying and wet but well worth the effort. Children take their ponies along it in order to get off the road, so it can become quite an obstacle course, but within the copses and on the banks there is a superb display of spring flowers.

With any luck there will be sheep enjoying the early grass in the meadow on your left. 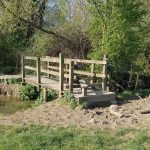 Other explorations: No. 1 behind the Wheatsheaf and later joined by No. 2 from Megana Way takes you to the Fairbourne stream which forms the southern parish boundary. There is a rather interesting marshy area in the corner, really good in late summer.The way leads up through Ampfield Woods and exits in Jermyns Lane. This walk could be combined with a visit to the Arboretum. By the entrance to the Hillier Garden Centre No. la (712) cuts across to Crook Hill and some refreshment at the Dog and Crook.

No. 3 at the top of Newport Lane eventually comes to the dwellings and farm that is Abbotswood. Just off Sandy Lane in Romsey Extra. My recommendation is that you turn on your heels and retrace your steps thus seeing a view over the village quite difference from the road version.

Parnell Lane (10) is an old road to Michelmersh. It is joined along the way by tracks to Eldon and back to Eldon Lane at Malthouse Farm. From this place No. 5 leads up to a good length of downland, passing our nearest Ordnance Survey triangulation point on the left, before a thick wood and into Rudd Lane beyond the houses at Casbrook.
Fingerposts point the ways; all you need to explore our charming countryside is a little time, some comfortable waterproof footwear and a little sunshine.